While resting my heart beats every other second at the lowest and during maximum intensity training it still raises above two hundred beats per minute. I have recorded almost each and every heart beat while training with Polar heart rate monitors or smart swatches the last twenty years. Thus, I have learned to follow and trust the feeling and know how the balance between training and recovery evolves.

I still remember Christmas 1992 and the proud face of my father when he did open up his present – that he actually had bought for himself. There was a big black watch and a rubber band. Next morning when we went skiing together he did put the band around his chest and told me that now the watch will tell him how quickly his heart is beating. For me that was totally incredible. Back then I was very fascinated by heart and my goal was to become the best cardiologist in the world so I was very excited about this new machine in our family. So, my first contact with a heart rate monitor was ten years after Polar had introduced the world’s first wireless heart rate monitor.

My next contact with a heart rate monitor was during the next summer. I had heard about this sport called triathlon and I wanted to try if I can do the longest discipline of it, the 180km bike ride. My father was not so sure if it was wise to let a 12-year-old girl go out and ride that long, but after I had been insisting long enough, we made a deal that we can do the ride together if I wear the heart rate monitor so he can see that I will not get over exhausted by going too fast. So, one beautiful morning I did put the heart rate monitor band around my waist, hopped on my pink little mountain bike and started to ride. The same evening when we ended up in my grandmother’s house after 180km of riding I did feel deep inside my heart that I was made for triathlon.

Polar and Finnish triathletes are the pioneers of training for success. Known as Mr. Heart Rate Monitor, a Finnish triathlete Pauli Kiuru and one of the Ironman legacy personalities, was pioneering the use of heart monitors in the sport of triathlon – and it was a Polar device. However, despite my early introduction and strong domestic presence in heart rate monitoring, my relationship with this did not evolve as quickly as I thought. I ended up being a competitive swimmer and started triathlon only when I was 17 years old. But as soon as I got my first real triathlon coach, Paul Sjöholm, he did give me a new heart rate monitor. Since then I have recorded my every single heart beat while training, excluding the swimming.

I am totally certain that heart rate monitor has been the most important tool during my triathlon career. Paul did always give the instructions to the sessions according to my heart rate and had I followed his plan as well as possible, we did know that the physical impact of the training was exactly as he wanted. Usually this did mean that I did not push too hard during the aerobic sessions and so we were able to build the amazing aerobic capacity I have today.

Heart rate monitor was, and still is, also an important tool for following my progress. I did soon learn one of the basics of endurance training: the lower the heart rate and the faster the pace, the better the endurance. Of course, this is not always that simple and there are many things that influence in the outcome of this equation, but as a basic tool I still think it is the best you can use in every day training. As I have always had quite strong competitive mind and every day I really want to beat myself of yesterday, I did learn already at young age to run and bike as smoothly as possible to keep the heart rate as low as possible at any given pace, the exception being the rare workouts when I was allowed to go all out.

Nowadays the heart rate monitor is still an important tool for me, but I would say that the pace, the watts and the running cadence may be even more important than the heart rate. I have learned to know my heart rate by feel after so many years of working with a heart rate monitor. I can also tell the factors that do influence in it so it is pretty rare that I do look at my heart rate numbers while training. My current coach Siri Lindley has actually taught me to fly by my heart – and I mean figuratively – without depending so much on looking at the numbers in my tools. And I think that at this stage of a long career this is exactly the right thing to do.

However after training sessions it is still very valuable for us to see how my heart has been beating. The result from the endurance equation above has not been evolving so much anymore during the last years and actually I could say that nowadays we know that there might be some trouble in the body if my heart rate is not what it is used to be. For example, we do know that my body is strong, fresh and able to perform when my resting heart rate stays around 30 bpm at the same time when I am able to take it up above 200 bpm. So, I did not become a cardiologist, but quite an expert on my own heart rate – thanks to Polar!

Polar was the first to introduce the world first wireless heart rate monitor almost 40 years ago and has been ever since developing solutions that help you to train smarter. To see how Polar products and services can help you to reach your training goals and how to turn your exercising into a success story, read more www.polar.com. 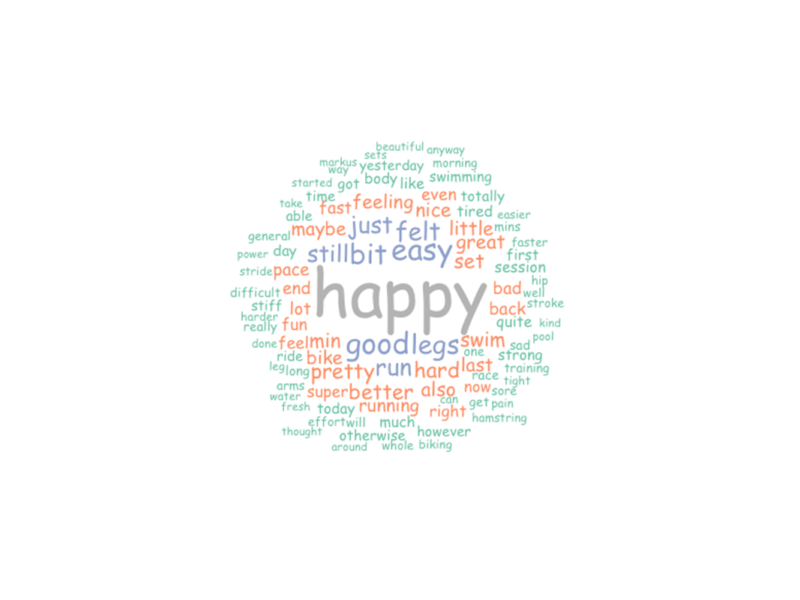 We took all the comments I have written to the post-activity comment -field since November 2016. This…

We use cookies to ensure that we give you the best experience on our website. If you continue to use this site we will assume that you are happy with it.Ok